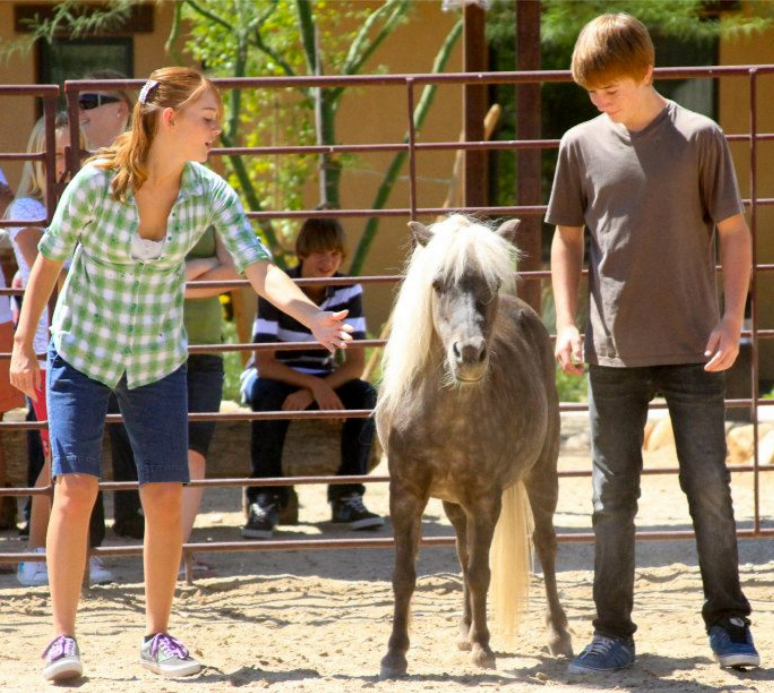 Animals are reliable, honest, often affectionate and loving, grateful and loyal; standards that are difficult for most people to live up to. The bond between human and domesticated animals goes back thousands of years. Serving as laborers, hunters, protectors, and nurturers. Domesticated animals are an integral part of society. In Rosewood’s Animal Assisted Therapy (AAT) program, our clinician’s use this natural relationship to facilitate the healing process. In one-on-one and group settings, clinicians incorporate goats, and horses into goal directed intervention scenarios where clients are provided an opportunity to work through issues in a supportive, non-threatening space. In this article Group Specialist and Rosewood’s Lead AAT Specialist, Cheryl Musick, shares heart-warming stories that exemplify the therapeutic work and healing that she and her team facilitate in Rosewood’s group and individual AAT sessions.

Adopted as a toddler, Brandon, an adolescent patient suffering from Bulimia, struggled with anger. Blond haired Brandon was small in stature for his age and would sometimes rage, throwing anything within reach. At home, he would binge and purge to control the overwhelming feelings within; however, since being in treatment, he was closely monitored and Brandon was having a difficult time coping. His Primary Therapist decided to take Brandon to visit the animals during one of his individual therapy sessions. There, he seemed to find solace in spending time with Emma, the once neglected and abused miniature horse. Brandon found it intriguing that the little horse could still trust people after she suffering at the hands of her abusers. His therapist noted a decrease in anxiety as Brandon began to explain his own painful past to the horse. Weeks later, Brandon became increasingly more open with his treatment team. He learned coping skills to effectively communicate; sharing his feelings rather than acting them out. Emma, the rescued mini horse demonstrated hope and healing to an adolescent who had endured similar painful experiences.

Sabrina often nervously twirled her black curls with her fingers. Wearing a large navy colored hoodie to hide her body, Sabrina struggled with shame and low self esteem. For many years she endured stares and comments from strangers; and worse, demeaning comments from family members who insisted she go on diets and advised to her to ‘do something with herself.’ Sabrina had difficulty with relationships, since friends in the past had betrayed her. Sabrina’s wild binges had gotten out of control and depression overtook her. During her first Animal Assisted Therapy session with two Nigerian Dwarf goats, Sabrina experienced a deep sense of connection with Ottis. The little white goat was shy and skirted away from people who reached out to him. Interestingly, once he was in her arms, he snuggled on her lap and nuzzled his tiny head under her chin, closing his eyes. Tears filled her eyes as she witnessed his willingness to trust her, though he was at first frightened and insecure. Getting to know little Ottis, Sabrina realized that, she too, could make an effort to trust her treatment team. A first step towards surrender in the recovery process.

Wearing a white tee shirt and khakis, Alan was convinced he didn’t deserve food. Tall, thin, balding and awkward, he presented with poor eye contact, staring at the ground while walking. Alan had been bullied for years and eventually isolated, pretending everything was fine. In reality, Alan felt inadequate, as if nothing ever did was good enough. Alan was resistant in completing therapeutic assignments, tossing them in the trash before he could present them. Alan was ashamed because he felt the assignments didn’t measure up to those he had heard in group Working with Therapy horse Jack one day, Alan learned to assert himself by communicating non verbally with the horse in an effort to move him from one end of the arena to the other. Alan was surprised and smiled for the first time while in treatment. During subsequent weeks, Alan learned to use positive body energy to communicate and set boundaries with the horses. The result was a more confident gait, improved self esteem and brighter affect.

A fundamental component to Rosewood’s AAT program is variety. We seek to provide clients with a variety of AAT experience in terms of type of animal and intervention, facilitation approach for both group and individual settings. Group members participate in feeding and caring for the animals to foster a sense of nurture and well being. In turn, Patients develop an increased awareness of their personal need for self nurture. Within the group environment, individual clients experience deeply personal and meaningful realizations. For example, during the feeding process, patients are amused at the eager nickers of the horses and bleating of the goats. At times, Patients are encouraged to mindfully use their senses to watch the animals eating, then share their observations. As for Alan, during this observation, the therapist posed a question, “Alan, do you think they deserve food?” Alan, dismayed, responded, “Of course they do, it would be cruel to starve them.” Looking into his eyes, the therapist asked, “Alan, what about you?” Alan froze, then slowly nodded his head with a crooked smile. “I get it, I really do.”

Rosewood offers a variety of AAT interventions to assist in the treatment of eating disorders and co-existing conditions. This includes:

What exactly is Animal Assisted Therapy?
According to Pet Partners, which was formally The Delta Society- AAT is defined as: “Animal Assisted Therapy is a goal-directed intervention in which an animal is incorporated as an integral part of the clinical health-care treatment process. AAT is delivered or directed by a professional health or human service provider who demonstrates skill and expertise regarding the clinical applications of human-animal interactions. “The trust and bond that develops between client and animal continues to warm my heart,” states Cheryl. The twinkle in her eye and the enthusiasm with which she shares these stories clearly demonstrates her passion for this work. Beyond the observations and anecdotal stories of Rosewood staff, there is a great deal of evidence regarding the therapeutic benefits of AAT.

Efficacy of Animal Assisted Therapy
In 1998 Kathryn S. Dawson, PhD and Sandra B. Barker PhD conducted a study of the effects of AAT on Anxiety Ratings of hospitalized Patients. The subjects consisted of 230 patients scheduled to attend Recreation Therapy sessions. A dog and handler was present at each session and included both individual and group interactions. The study found significant anxiety reduction for patient with a variety of Psychiatric diagnoses. The study also found positive responses in withdrawn and unresponsive patients which included smiles, hugs and speaking.

This morning exactly 3 months after leaving Rosewood my body proved to me that even after all I have put it through, it is amazing.